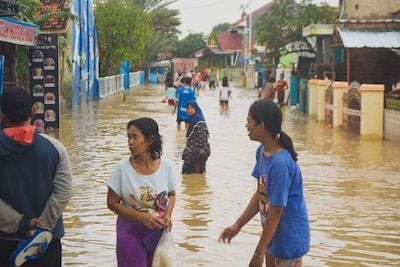 As Pakistan marks the 75th anniversary of the partition from India and the birth of the nation, it has been struck by some of the worst flooding in its recent history caused by torrential monsoon rains.

There has been five times as much rainfall compared to the 30-year average in the worst hit areas. Villages and huge areas of agricultural land have been cut off. According to the Government of Pakistan: a third of the country, equivalent to an area the size of Great Britain, is under water.

Infrastructure including roads and bridges have been badly damaged making transport and relief efforts difficult.

Disaster Aid UK & Ireland are launching an appeal to help. We are joining Disaster Aid country partners, NGOs and other relief organisations and are actively reaching out to communicate with local Rotarians and other organisations to establish exactly what resources are needed.

With your help and generosity allied to our expertise in shelter and safe water solutions we can give ‘a hand up, not a handout’ to people who desperately need our help and humanity.

Disaster Aid UK & Ireland is one of the founding partners of  Disaster Aid International (DAI). DAI is an international organisation, involving Rotary Clubs around the world, with the mission to:

In contrast to many other disaster-response groups, our aim is also to provide an infrastructure that allows affected communities to regain their normal lives.

If your organisation, club or group would like a speaker for your meetings, we would be very happy speak about Disaster Aid UK & Ireland, and answer any questions they might have.

Please contact us with suggested details of the time and date of the meeting.  Email: admin@disasteraiduk.org

View video for the role of DARTS

With the advent of Covid-19, our usual method for deployments has been severely disrupted, in that we have been unable to utilise our fully trained Disaster Aid Response Team volunteers (DARTS). However, in the ordinary course of events and hopefully in the near future we would send DARTS to the affected country in order to: